Top PHP Developers in Every Country

A new feature was just launched that allows seeing which are the top PHP developers in each country of the world that have contributed to the PHPClasses site.

Read this article to learn how the top authors ranking by country works and what you can do to feature and climb in these rankings.

Recognition from the PHP Community

Top Authors in Every Country

Recognition from the PHP Community

The PHP Classes site was built to allow PHP developers to exhibit their code and get eventual feedback and recognition from the PHP users that come to the site.

The PHP Classes site already does a lot to get feedback and recognition to the PHP developers that share their code in the site, but it can do much more.

This year a great part of the development of the site focused on the improvement of aspects that matter to contributing PHP developers. This time the improvements were done on an aspect that eventually will improve the recognition that those developers will get from their country PHP community.

Since the early days, the site computes a ranking of contributing authors based on the number of distinct users that downloaded their class packages. This ranking is updated once a day.

Actually, there are two author rankings: one that considers the number of distinct users that have downloaded author packages since the beginning of the site, and another that only considers the downloads done by users in the current week (last 7 days). The top 10 authors of all time and for the week are listed in the Top 10 Charts page. 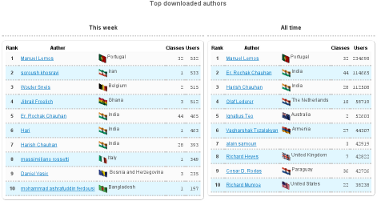 The site also shows ranking positions in each author's page, as well in the page of each package.

Keep in mind that the site keeps records of which users downloaded which packages as long as the users are logged when they view or download the package files.

Requiring the users to be registered and logged when they download a package is an option of the author. If an author disabled the login requirement option for any of his packages, the package users count may not be accurate for that author, as downloads done by anonymous users are not accounted.

So, despite the login requirement may be a bit annoying for some users, it is an effort that they need to go through in order to allow building these rankings as accurately as possible. Consequently, it enables these site features that encourage authors to eventually contribute with even more packages, more frequently.

So in the end, the users also gain something indirectly for having been through the registration and login process. Despite it may not be an obvious benefit when they are prompted to register, the users are the ones that have to gain more from the way this site works.

When you find users that are reluctant to register because they feel it is an unnecessary bureaucratic step, you can help explaining them that the more users register, the more encouragement authors get to contribute even more code for the benefit of the whole community.

Top Authors in Every Country

The top author rankings are a great form of implicit feedback to the authors. They allow them to see how they are doing in terms of interest that their packages have raised.

Seeing themselves raising in the rankings over time may become a powerful motivator that encourages them to contribute with even more packages. The more packages authors contribute, more users will become interested in their work.

However, given that the PHP Classes site is a long standing site which so far already attracted over 3,000 contributing developers, it is hard for newcomer authors to reach higher ranking positions.

This provides all authors the opportunity to become noticed right after they start submitting their first packages, especially in the week ranking, even if it is just among the authors of their country, 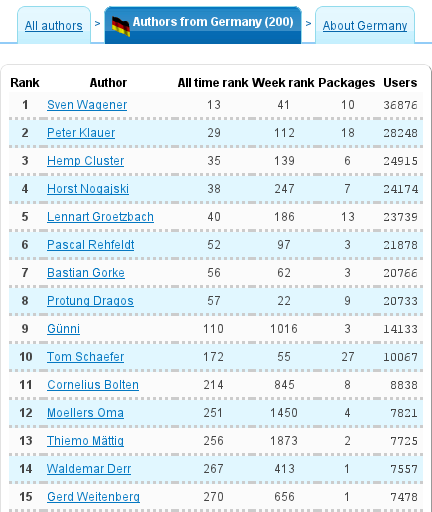 Currently the country author ranking pages only list the top 100 authors. Some countries have more than 100 authors. Soon there will be support to list all authors, spliting the listing in multiple pages with 100 authors each.

Other than that, this is just one feature that was implemented to encourage more authors to submit more and better packages. This feature is also already enabled in the JSClasses site, the PHPClasses brother site for JavaScript components.

There are other features planned to be implemented in order to promote better the submissions of all authors.

Still it would be useful to hear about other ideas on how to promote better the work of authors that share in this site.

So, please post a comment with your opinions about this feature or with suggestions about other features that you would like to see implemented to promote even better the work of the contributing authors.